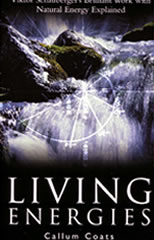 Foreword. It is very difficult to observe the extraordinary creativity and fruitfulness of Nature without a sense of wonder. But wonder is at odds with reason. It has been said that humanity's schism with Nature was contrived so that we could develop our sense of reason to the extent that we now experience. One of the outcomes of this, because they are preoccupied with physical form, is that our contemporary biological sciences seem to believe that this munificent fecundity of Nature 'just happens'. Viktor Schauberger's vision was that this 'happening' is the result of a complex interaction of subtle energies, a process that is initiated and sustained from what he called the 4th and 5th dimensions of Being. Viktor Schauberger was a man who was undoubtedly inspired by more exalted levels of reality and meaning than most of us experience. His great gift was to be able to show how it is the finer and 'higher' energies that are responsible for creating form and structure, not the other way round as contemporary science would suggest. The story of his life is tragic at a personal level, for he was constantly ridiculed, because of the vested interests of science for whom he was a threat. He died a broken man when he saw that the gift he wanted to make was corrupted by the powerful for material gain. His prophetic vision was that humanity was bound for self-annihilation if steps were not immediately taken to change course. In a real sense we have had to see many of his specific prophecies come true before we were ready to take him seriously. Schauberger died in 1958. Why has it taken so long before a book could be published that is so vital to the salvation of humanity? Part of the answer lies in history. When Austria was absorbed by Nazi Germany in 1938 there was a cultural melding. Viktor Schauberger was an Austrian, as was Hitler, who saw that this remarkable inventor could be valuable to his cause. Although Viktor was coerced to work for the Third Reich, he has inevitably been associated with it. Postwar German consciousness, being anxious to distance itself from the Hitler period, could not then easily embrace Schauberger's vision. It took a Swedish engineer inspired by the vision of Rudolf Steiner to rescue Viktor Schauberger from oblivion in 1976. Steiner and Schauberger were contemporaries, and it is tempting to believe that they were both inspired by a similar source of profound wisdom of universal meaning. They had some lengthy discussions, and one wonders how much common ground they found ! ...