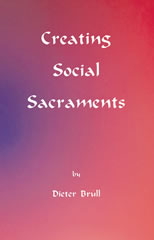 Preface. This book represents an attempt to penetrate to the heart of social life, which is essentially something holy, a sacrament. The patron saint of social life is John the Baptist, and its divine inspirator and helper is the Elohim Uriel, who stands with the other six Elohim under the direct guidance of Christ. What arises through their guidance may be called the Christian social impulse. Since Uriel is almost unknown, we will explore his activity first, in "Five Urielic Considerations." These were first published in the magazine Lazarus (Raisdorf 1989/2;1991/1;1994/1,2,3) and revised for this book. My intention is to gather together building blocks toward a sacramental approach to social life-not to replace the ecclesiastic sacraments, but to stand beside them. Both social and ecclesiastic sacramentalism are subject to Uriel. Each assumes that Christ faces us in every human being. That is why throughout the text, I have capitalized the word “Other” when referring to fellow human beings. I take sole responsibility for this book, although I must credit many indirect collaborators. Sigismund von Gleich (1896–1953) deserves first mention; this book is dedicated to him. As my fatherly friend and unorthodox initiator into anthroposophy, in jest he long ago named me his “adjutant,” who was to follow him-again, in jest-as he set off, after the war, to conquer Europe for threefolding. His adjutant did not remain faithful. The meaning of his last work, Die Inspirationsquellen der Anthroposophie (Zeist 1953, 2nd edition, Stuttgart,1981) particularly, escaped me. Then, eight years ago, when I began this work, the sponsor of my attempt-encouraging, helping, reminding, consoling, and wishing to remain unnamed, pointed to the Inspirationsquellen, and I “overheard” it. Once the text existed in rough outline, I discovered that the foundation for what I wanted to say was already laid by Sigismund von Gleich in that book and in two articles in Blätter für Anthroposophie (Stuttgart 1951/1,5). From beyond the threshold he again served me greatly. What he had worked through and published dispelled my last doubts as to whether what I was able to say about social sacramentalism was publishable at all. May this book express my amende honorabile and my gratitude for my great teacher. Others across the threshold stand behind this book-partly through what they gave me during their lives, as Karl König and Stefan Lubienski, and partly through what they have meant to me after their deaths: through their work, remembrance of them, and also because I was able to experience them as lovingly accompanying my work. ...