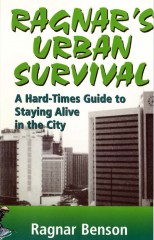 The tap's run dry, the supermarket shelves have been ransacked, the power is off - for knows how long - and the low rumble of tanks can be heard in the distance. Those who refused to believe that such a thing could happen in America and did nothing to prepare will live as wretched refugees - if they can survive the crisis at all. But for the prepared - for the city survivor - though life will be a daily struggle, life will go on. ln this, his ultimate handbook on surviving in the city, Ragnar Benson, America's leading survival author, debunks the myth that the only way to survive a crisis is to stock a retreat in the mountains and shows how properly prepared urban dwellers can make it through any emergency. He tells you how to find, purify, and store water in the city; trap wild game; butcher what you've caught or raised; use the abundant (and free) food sources common to almost every city; preserve food for lean times; position your retreat for maximum safety; avoid troops; and barter with other survivors. You'll learn which weapons are absolute necessities and which aren't worth having, and confront the all - important topic of survival nursing care for the ill and injured. Gleaning advice from survivors who have lived through catastrophic events in Beirut, Berlin, and Karachi, Ragnar gives you the solid information you will need to make it if the worst - case scenario becomes a reality. ...