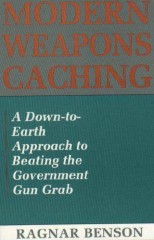 Weapons caching has been an important strategy in at least two of the major wars fought in the past fifty years. Initially, it may seem strange to view weapons caching as having a significant impact on World War II, but in the case of occupied France from 1940 to 1944, the willingness and ability of the French Resistance to take delivery of weapons, move them around the country. and then safely store them against the day of need contributed in part to the defeat of the Nazis. Although the Resistance efforts were considered by many to be relatively puny (they used only three thousand pounds of C-4 for their entire operation, less than one goodsized bomb from a B-24 Liberator), they were more effective at sabotaging the Nazi war effort by stopping the production and flow of munitions than the entire bomber command, and inadvertent civilian casualties from Resistance activities were very light. ...