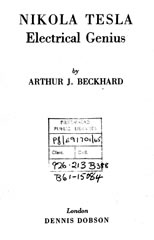 Chapter 1. On JANUARY 9, 1861, many events occurred which were to reshape the history of the world. In America, the opening gun of the Civil War sounded the warning of the bloody years to follow. In Germany, young Bismarck, who was to be Germany's first Chancellor, and responsible for the militarization of the Fatherland, received his first decoration. In England, Queen Victoria was forging into a unified whole the far-flung British Empire and casting knowing eyes upon the Suez Canal, which had been started the previous year. In the little town of Smiljan in the Serbian province of Lika, then known as Croatia, a seemingly unimportant event took place which, too, was destined to shape the future. Nik.ola Tesla, scarcely five years old, found the family's pet poodle Trixie dying. The little black poodle was lying under a bush at the side of the road, whimpering, and the small boy picked her up and carried her home to his twelve-year-old brother Dane. Strangely, the death of that pet dog was to be the first of several events that would determine the course of Nikki Tesla's life. ...