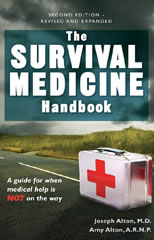 Preface. The second edition. When we first embarked on the adventure of writing the first edition of this book, “The Doom and BloomTM Survival Medicine Handbook”, we were overwhelmed by the challenge that confronted us. Although there was a wealth of information about the occasional few of injury on a wilderness hike, books considered the possibility a setting so remote or devastated that NO hope of modern medical care existed for the long term. Even books that were meant for in third world environments often ended their use to get to modern medical chapters by exhorting their readers care as soon as possible. We realized that we were in uncharted territory. Our concern was the major catastrophe that isolated a family from modern medicine for the long term. Trained personnel would not exist in this scenario, or would be overwhelmed by the demand for their services. What does a mother or father do in this circumstance? How would they deal with injuries or sickness ? What could we, as medical professionals, do to improve their family’s chances of surviving and staying healthy ? ...