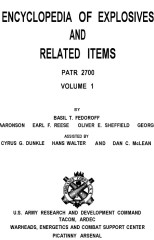 The widespread imerest in explûsives during and since Wodd War li has resulted in the need for a comprehensive coverage of the field of explosives and re-lated items. In 1941-1944, Dr B. T. Fedoroff in collaboration with G. D. Ciift had published a "Laboratory Manual of Explosives" in four small volumes (Lefax Co), for which there were nurnerous requests. Since the printed editions had been exhausted and the plates were no longer available, Dr Fedoroff decided to write a revised edition. As the work progressed, it bec ame evident that additional help would be needed, not oniy because of the tremendous expansion of the iiterature, but also because ir was decided ro broaden the scope of the work This Encyclopedia is intended to cover the following items: a)Military and industrial explosives, explosive compositions, propellams and pyrotechnie compositions b)Explosi~es and explosive compositions which have not been used for military or industrial purposes c)Analytical procedures for the more common explosives, propellants and pyrotechnie compositions d)Compounds which def· lagrace or may possibly explode because of the presence of plosophoric groups e)AmmWli.tion items, such as projectiles, bombs, grenades, detonators, fuzes, etc f)Calibers of weapons and projectiles used in the US and foreign countries g) Brief definitions of ordnance terms h)Names of sdentists who made important contributions in the fields of explosives, am munition and weapons Over the years a number of works, including dictionaries, have been publisbed in the field of eJCplosives, propellants, etc, which are of general or limited scope. None of these bas attempted to include in one work a comprehensive coverage of the broad field of items listed above The authors hope thar this Encyclopedia will be of value nor only in saving many hours of library work but also in reducing the need for much laborarory work in order to obtain information already available. Iris hoped thar sorne of the data and even lack of data may stimulate additional work in the fields covered In compiling this work, the authon; have freely consulted with; and had the cooperation of so many individuals that a listing would be impractical. Any artempe to do so would surely result in sorne embarrassing omissions. We therefore take this opportunity to thank ali tho se who have been consulted or who have helped in other ways in the preparation of this work. Throughout the Encyclopedia information received from individuals is acknowledged in the text. Picatinny Arsenal Technical Information (Library) reference works, such as journals, pcriodicals books and u.nclassified reports, were made available chwugh che cooperation of all Library personnel. The complete copy of this manuscript was Vari-typed by Miss Margatet Dee, Mrs Sylvia Griffin and Mrs Bertha Kelly with the cooperation of Mr Joseph Farkas & Mr John Noonan, whom we consuhed freely (ail of the Technical Publications Unit, Feltman Research and Engineering Laboratories). Special acknowledgement is due to the officiais (bath military and civilian) of P icatinny Arsenal for encouraging this work and for obtainiog its financiai support. ...