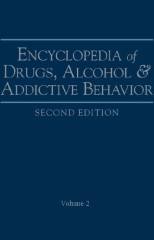 ECONOMIC COSTS OF ALCOHOL ABUSE AND ALCOHOL DEPENDENCE Alcohol abuse and alcohol dependence continue to be major health problems in the United States. The terms alcohol abuse and alcohol dependence are based on the diagnostic criteria as stated in the American Psychiatric Association’s DIAGNOSTIC AND STATISTICAL MANUAL of Mental Disorders, Third Edition, Revised (1987). As such, they cost the nation billions of dollars in health-care costs and reduced or lost productivity each year. Since the mid-1980s, researchers have issued studies that estimate the economic costs associated with alcohol and alcohol abuse in the United States. In 1985, alcohol abuse and dependence cost an estimated 70.3 billion dollars and in 1988 an estimated 85.8 billion dollars (Rice et al., 1990, 1991). In 1998, the National Institute on Drug Abuse (NIDA) and the National Institute on Alcohol Abuse (NIAAA), which are parts of the National Institutes of Health (NIH), released a study on these costs based on 1992 survey data. This report, which also analyzed drug abuse, forms the basis of this article. ...