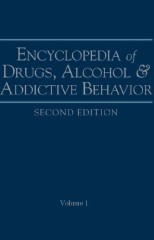 Why a second edition of the Encyclopedia of Drugs and Alcohol? And why change the name to the Encyclopedia of Drugs, Alcohol, and Addictive Behavior? Consider a smattering of statistics: • In 1999, 10.3 million people (4.7% of the American population) ages 12 years or older were dependent on illicit drugs or alcohol (National Household Survey on Drug Abuse, 1999) • In 1998, it was estimated that approximately 19,000 alcohol-induced deaths occur annually in the United States (excluding those deaths due to motor vehicle accidents involving alcohol) (National Vital Statistics Reports, Murphy, 2000) • In 1993, it was reported that 13,984 people were killed in alcohol-related motor vehicle accidents; 3,765 of these individuals had not been drinking themselves (Heien, 1996) • In 1998, 16,926 deaths were attributed to drug-induced causes (National Vital Statistics Reports, Murphy, 2000) • In 1998, chronic liver disease and cirrhosis ranked as the tenth leading cause of death in the United States (National Vital Statistics Reports, Murphy, 2000) • Fetal alcohol syndrome affects one in every 600–750 births, and is currently the leading cause of mental retardation, beating out previous contenders such as Down syndrome and spina bifida (Abel, 1986) • Economic costs to society related to alcohol and drug abuse were projected at nearly $246 million in 1992; projections for 1995 suggested that economic costs related to alcohol and drug abuse would reach over $276 million (National Institute on Drug Abuse and National Institute on Alcohol Abuse and Alcoholism) • Smokers ages 18–25 have a fourfold increased likelihood of illicit drug use compared to their nonsmoking peers; smokers ages 12–17 have a sevenfold increased likelihood of illicit drug use compared to their nonsmoking peers (1999 National Household Survey on Drug Abuse) • In 2000, the United States put together an emergency aid package to Colombia, totaling $1.3 billion, intended in part to address the issues of drug trafficking between Colombia and the United States (White House, Office of the Press Secretary, 2000) • In 1999, the annual cost for problem and pathological gambling reached $5 billion, with lifetime costs projected at $40 billion associated with decreased productivity, social service costs, and creditor losses (Gerstein et al., 1999) ...