Choi Hong Hi - Taekwon-Do The art of self defence 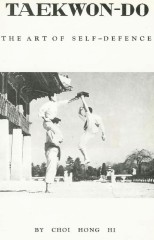 PREFACE Persistent requests and even demands from many people of other nationalities who are interested in this art have convinced me of the need of an English edition of my original text book on Taekwon-Do. ln fact, from the view of national pride and prestige, it is a privilege for me to have this opportunity of introducing the Korean art of setf-defence to many nations. Since the first edition was published in Korean in 1959, it has been widely used and is now accepted as the standard book. Taekwon-Do is taught in various schools, civic as weil as military, as a part of the training throughout Korea, the home of Taekwon-Do. In 1959, the Military Taekwon-Do T eam, led by myself, toured most of the Far East and South East Asian countries and helped to popularize the art .in those countries. Today, there are numerous centres throughout the world. Taekwon-Do requires no wea pon, it uses only the ba re bands and feet. (Ile nee the Japanese derivation : Karate, meaning 'ba re hands'.) It employs 17 parts of the body to attack 54 vulnerable and critical spots (vital spots) on the opponent, and should it be necessary, it can deprive the opponent of his !ife. But Taekwon-Do should be practiced only with a spirit of democracy, which is also the Korean national foundation. Taekwon-Do is not bellicose or provocalive, in that it should never be used for attack. It should only be a weapon for self-defence, or to defend the justice or weak. Taekwon-Do is not only for the strong, but any person wishing to master the art can do so : young or old, male or female, big or small. Tbis book has been written for the serious students of Taekwon-Do in mind. It does not do away with a need for a qualified instructor, nor is intended to be a 'teach-yourself' guide. It is comprehensive, and incÎudes much material, such as the new patterns of manoeuvre and exercises originated by myself, that are not to be found elscwhere. To the more expert, this book will serve also as a text for reference. My sincere thanks and heartfelt admiration should go to my students who have rendered both time and enthusiasm in posing for thousands of photographs used in this book as illustrations. At the same timc, I appreciate Mr. Shin Hak-Kyun, photographie artist, for his untiring efforts in fulfilling the tremendous tasks he has assumed. The members of the Korean Taekwon-Do Association who gave valuable suggestio.n s concerning both terse and vivid expressions in compiling this edition must be also appreciated. I should like to express my deep gratitude to Mr. Choi Chung-Su, President of Daeha,Publication Company, without whose help and encouragement this book would not have been published. Thanks also should go to Mr. Justin C.S. Kim who have read proofs and prepared both glossary and index. ln March, 1965. Choi Hong Hi ( 9th Degree ) President, the Taekwon-Do Association ...