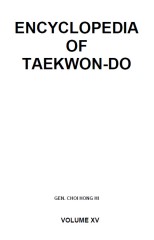 HWA-RANG: is named alter the Hwa-Rang youth group which originated in the Silla Dynasty in the early 7th century. The 29 movements refer to the 29th lnfantry Division, where Taekwon-Do developed into maturity. CHOONG-MOO: was the na me given to the great Admirai Yi Soon-Sin of the Yi Dynasty. He was reputed to have invented the first armoured banleship (Kobukson) in 1592, which issa id to be the precursor of the present day submarine. The reason why this pattern ends with a left hand attack is to symbolize his regrettable death, having no chance to show his unrestrained potentiality checked by the forced reservation of his loyalty to the king. KWANG-GAE: is named after the famous Gwang-Gae-Toh-Wang, the 19th King of the Koguryo Dynasty, who regained ali the lost territories including the greater part of Manchuria. The diagram (±) represents the expansion and recovery of lost territory. The 39 movements refer to the first two fiqures of 391 A.D .• the year PO-EUN: GE-BAEK: EUI-AM: he came to the throne. is the pseudonym of a loyal subject Chong Mong-Chu (1400) who was a famous poet and wh ose poem "1 would not serve a second mas ter though 1 might be crucified a hundred times" is known to every Korean. He was also a pioneer in the field of physics. The diagram (-) represents his unerring loyalty to the king and country towards the end of the Koryo Dynasty. is named alter Ge-Baek, a great general in the Baek Je Dynasty (660 A.D.). The diagram (1) represents his severe and strict military discipline. is the pseudonym of Son Byong Hi, leader of the Korean independance movementon March 1, 1919. The 45 movements refer to his age when he changed the name of Dong Hak (Oriental Culture) to Chondo Kyo ( Heavenly Way Religion) in 1905. The diagram ( 1) represents his indomitable spirit, displayed wh ile dedie a ting himself to the prosperity of his nation. ...