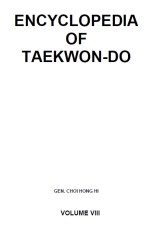 PATTERNS ( Tul) The ancient law in the Orient was similar to the law of Hamurabi, "an eye for an eye, a tooth for a tooth," and was rigorously enforced even if de ath was caused accidentally. ln this type of environment, and since the present system of free sparring had not yet been developed, it was impossible for a studentofthe martial arts to practise or test his individual ski li of attack and defense against actual moving opponents. lndividual advancement was certainly hindered until an imaginative practitioner created the first patterns. Patterns are various fundamental movements, most of which represent either attack or defense techniques, set to a fixed and logical sequence. The student systematically deals with several imaginary opponents under various assumptions, using avery available attacking and blocking tool from different directions. Thus pattern practice enables the student to go through many fundamental movements in series, to develop sparring techniques, improve flexibility of movements, master body shifting, build muscles and breath control, develop flu id and smooth motions, and gain rythmical movements. lt also enables a student to acquire certain special techniques which cannot be obtained from either fundamental exercises or sparring. ln short, a pattern can be compared with a unit tactic or a word, if fundamental movement is an individual soldier's train ing or alphabet. Accordingly, pattern, the ledger of every movement. is a series of sparring, power tests, feats and characteristic be auty. Though sparring may merely indicate that an opponent is more or less advanced, patterns are a more critical barometer in evaluating an individual's technique. The following points should be considered while performing patterns: 1. Pattern should begin and end at exactly the same spot. This will indicate the performer's accuracy. ...