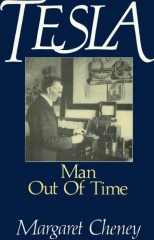 "I do not think there is any thrill that can go through the human heart like that felt by the inventor as he sees some creation of the brain unfolding to success... Such emotions make aman forget food, sleep, friends, love, everything". Nikola Tesla, 1986. Acknowledgments. I wish particularly to thank: Leland Anderson, one of the founders of the Tesla Society, a coauthor of the annotated Dr. Nikola Tesla Bibliography (San Carlos, Ca., Ragusan Press, 1979), and author of the monograph, "Priority in the Invention of Radio, Tesla v. Marconi," Mr. Anderson's research and scholarly works on Tesla have been a major interest of his life. An electrical engineer and former computer consultant, he reviewed mr manuscript and generously shared his collection of Tesliana, including many previously unpublished materials and photographs. Maurice Stahl, a physicist formerly with the Hoover Company and now a consultant for the McKinley Historical Museum in Ohio (featuring a Tesla exhibit), also reviewed the manuscript and advised on technical aspects. Dr. Bogdan Raditsa, who served under President Tito of Yugoslavia in the early days of his administration, clarified and amplified Yugoslav-Ailied politics during World War II as it affected Tesla. He has lived in America for many years, writes books and articles, and teaches Balkan history at Fairleigh Dickinson University. Dr. Lauriston S. Taylor, a radiological physics consultant and recent past president of the NCRP, is an authority on the pioneers of X ray and, as such, read and commented on Tesla's contributions in this field. Lambert Dolphin, assistant director of the Radio Physics Laboratory, SRI International, analyzed Tesla's research in bali lightning, particle-beam weapons, radio communication, and alternating current Dr. James R. Wait, formerly senior scientist at the National Oceanic and Atmospheric Administration environmental research laboratories at Boulder, Colorado, and an authority on wave propagation, commented on Tesla's concept of electromagnetic energy being transmitted "through the Earth," as did Mr. Anderson. ...